A Dubai-based start-up company has been putting special focus on full-body cryotherapy cabins for horses and the results are already being seen.

Based in Downtown Dubai, Revive offers a full range of professional cryotherapy equipment across the sports and wellness industries.

A world’s first, the research and development work for this equestrian cryotherapy equipment was carried out by specialist engineers at the manufacturer’s facilities in Finland.

Now, with several cabins operating for racehorses and endurance horses in the UAE and across the world, the company continues to go from strength to strength.

In a highly competitive sport like horse racing, where the advantage of a few seconds could be worth millions of dollars, the return on investment is potentially huge.

Along with his team at Revive, he figured the same technique could work for horses and has been developing equestrian cryotherapy ever since.

“Horses and humans are both mammals, so they share a lot of the same physiology. Everyone knows about using ice packs on bumps and bruises to reduce swelling – it’s the same principle,” Jurkovic told Sport360.

“If you train really hard, or you play a 90-minute football match, lactic acid builds up in the muscles and that’s what gives you muscle ache or cramps. It’s the same with horses.”

Interestingly, with the outbreak of Covid-19 pandemic, Revive is also starting to see spiking interest in their Cryo Cabins as they help boost human antibody production and increase levels of immunity.

“Imagine a fully-grown thoroughbred racehorse weighs around 600 kilograms, that’s a lot of muscle to get sore. During this global COVID-19 pandemic, it’s our human cryotherapy cabins that are actually getting a lot more interest,” he said.

“Cryotherapy is a great way to ramp up the flow of oxygenated blood throughout the body and increase hormone and antibody production to boost the immune system. More immunity is just what the doctor ordered for us right now.”

A cryotherapy session for a racehorse lasts around eight minutes and they use super-cold nitrogen vapour to cool the cabin to around minus 140° Celsius.

This vapour is recirculated gently around the horse, while thermal imaging cameras monitor the treatment and check the horse’s body temperature to ensure it’s all completely safe.

“The technology is complex, and it’s engineered for us in Scandinavia. But the principle is straightforward. The machine is built like the starting gates at a horse race, so it’s easy for the horses to use,” Jurkovic said.

“They enter through a door at the rear and once finished, they walk out again at the front. The horses’ heads are supported outside the cabin at all times, so they are still breathing regular air.

“The session boosts oxygenated blood and natural hormone production, so the horse can recover quicker. That means they can train harder and more frequently, and this helps them become stronger and faster, like any other athlete.

“The best thing is, the horses actually enjoy it.”

Racehorses react well to the treatment and Zabeel Stables in Dubai is starting to see game-changing results after only the first year of regular use.

And if recent results are anything to go by then the horses, trained by Satish Seemar, are certainly bearing fruits of its stunning technology.

“Racing is big business, with prizes worth millions of dollars and the potential to boost race winnings is huge. We have been very cautious about shouting too loud until we were really sure about our equipment and the results. But frankly, all the feedback we have is positive,” said Jurkovic.

“For the doubters, we are about to embark on an independent, year-long veterinarian trial at a leading equestrian centre. The researchers will have proper controls in place so we have comparable results. At the end of that, we will have a clinical paper that we hope will be published to add to the literature already available.”

While cryotherapy has attracted positive reviews over the years for its abilities to allow athletes to train harder and recover quicker, it has also attracted negative reviews.

Some believe there is no research to back up its health benefits, while others believe the ability to recover faster and train harder is purely just a myth.

History, however, proves it’s advantages and effectiveness, stretching back to 2500 BC when the Egyptians used the cold to treat injuries and inflammation. 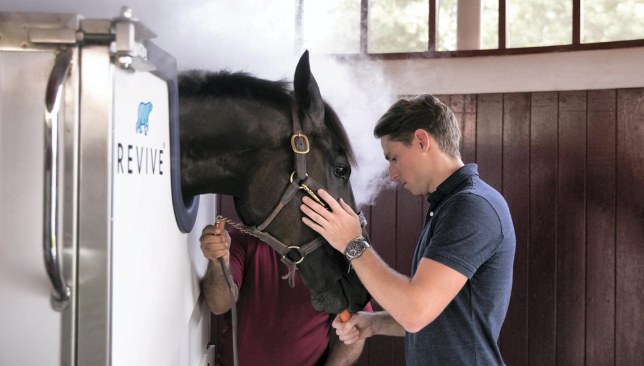 “Modern cryotherapy as we know it was first used in Japan in the 1970s, so it’s been around for fifty years. But the principles of using extreme cold for physical therapy are much, much older and were around even in ancient Egyptian times,” he said.

“Cryotherapy is now becoming a regular part of training for some of the world’s fastest horses. In that sport it’s like Formula One, very little is left to chance and it’s all about training, testing and improving.

“Our developmental work was accompanied by a great deal of regular testing and everything we have seen so far looks very positive.

“Horses like the therapy and you can see that they bounce back faster after training. Even small injuries and blemishes in their fur heal faster, and that’s also a good indicator.”

The future for Revive certainly looks bright. Interest from Japan, South Korea, Australia and other neighbouring Gulf countries, as well as active leads in the USA, have only bolstered their current position in the market.

They are also in discussions with professional trainers in Ireland, Germany, France, the UK and even have interest from polo clubs as far away as Argentina.

“We spent a lot of time developing and refining our first prototype, working closely with leading trainers, veterinarians and cryo engineers. We had to be sure the cabin was one hundred percent safe for horses,” he said.

“Now we’ve sold more cabins and the sales funnel is healthy. We believe that cryotherapy will become a regular part of the training routine for many kinds of horses, both racing and competition horses, and other working horses, military and police horses.

7 Characters That Need to Return in Jurassic World 3

After 10 Years Away, The Original “King Of Kong” Is Making A Comeback
11 mins ago

TV Guide Will Participate in Blackout Tuesday: What That Means and How We’ll Observe #TheShowMustBePaused
13 mins ago