The United States death toll from the novel coronavirus topped 10,000 on Monday, according to Johns Hopkins University statistics.

The US has the third-highest number of reported deaths from the disease in the world, only exceeded by Italy with 15,887 and Spain with 13,055.

White House medical experts have forecast that between 100,000 to 240,000 Americans could die as a result of COVID-19, the respiratory disease caused by the new coronavirus, even if sweeping orders to stay home are followed.

The US had entered what an official called the “peak death week” of the coronavirus on Monday, while a watchdog report said hospitals were struggling to maintain and expand capacity to care for infected patients.

He raised particular alarm for the states of New York, New Jersey, Connecticut and the city of Detroit, Michigan.

Separately, on NBC’s Today programme, Giroir said: “Whether you live in small-town America or you live in the Big Apple, everyone is susceptible to this and everyone needs to follow the precautions we’ve laid out.” 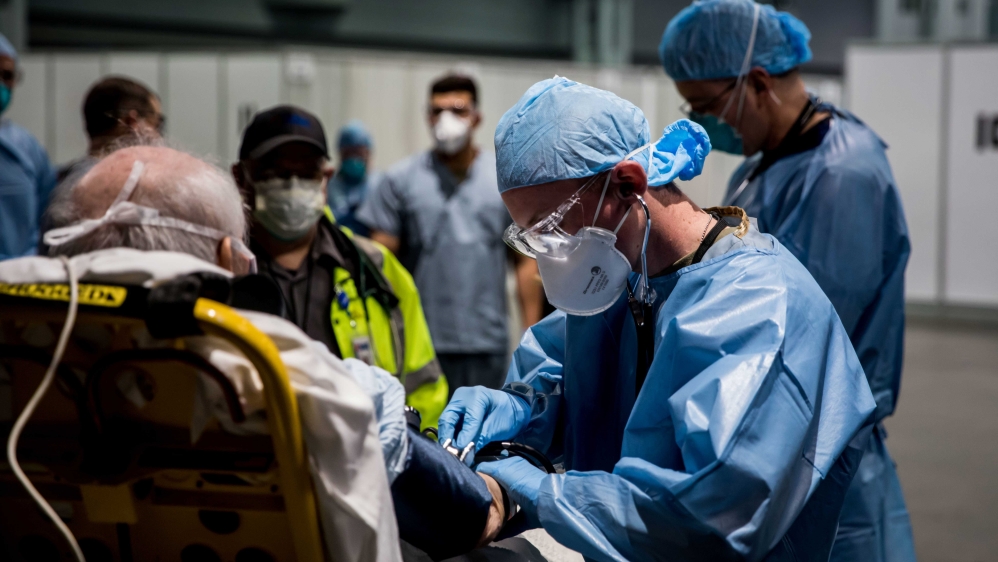 More than 90 percent of Americans are under stay-at-home orders issued by state governors while eight states are still holding out on imposing such restrictions.

The report, based on a national March 23-27 survey, showed that “severe shortages” of testing supplies and long waits for test results were limiting the ability of hospitals to keep track of the health of staff and patients, the US Department of Health and Human Services Office of Inspector General said.

“Hospitals also described substantial challenges maintaining and expanding capacity to care for patients,” said the report, described as a snapshot of the issues hospitals faced in mid-March. Efforts were being made to address those issues, it said.

The watchdog said “inconsistent guidance from federal, state, and local authorities” was confusing hospitals and the public, while widespread shortages of personal protective equipment put hospital staff and patients at risk.

New York City Mayor Bill de Blasio said that a shortage of medical professionals was replacing a lack of equipment as the city’s primary need, and called for an additional 45,000 clinical personnel for April.

“More and more, the challenge is going to be personnel,” de Blasio told reporters outside a surgical gown manufacturing facility. “We need these supplies, but we also need heroes to wear them.”

The city has reported more than 3,100 deaths, and it may resort to temporarily burying the dead in an unspecified park, said Mark Levine, chair of the New York City Council health committee.

“Soon we’ll start ‘temporary internment’. This likely will be done by using a NYC park for burials (yes you read that right). Trenches will be dug for 10 caskets in a line,” Levine wrote on Twitter. “It will be done in a dignified, orderly – and temporary – manner. But it will be tough for NYers to take.”

Freddi Goldstein, the press secretary for the mayor, clarified on Twitter that the use of local parks as burial sites was not being considered.

“We are exploring using Hart Island for temporary burials, if the need grows,” she tweeted, referring to an island off the coast of New York City’s northern borough, the Bronx.

The pandemic was also taking a toll on the New York Police Department, which said 18.6 percent of its uniformed workforce was out sick on Sunday, including 5.1 percent of who tested positive for the coronavirus.

Despite the grim warnings, at least one model offered hope that the death rate was slowing.

The University of Washington model, one of several cited by US and some state officials, now projects US deaths at 81,766 by August 4, down about 12,000 from a projection over the weekend.

The model, which is frequently updated with new data, projects the peak need for hospital beds on April 15 and for daily deaths at 3,130 on April 16. 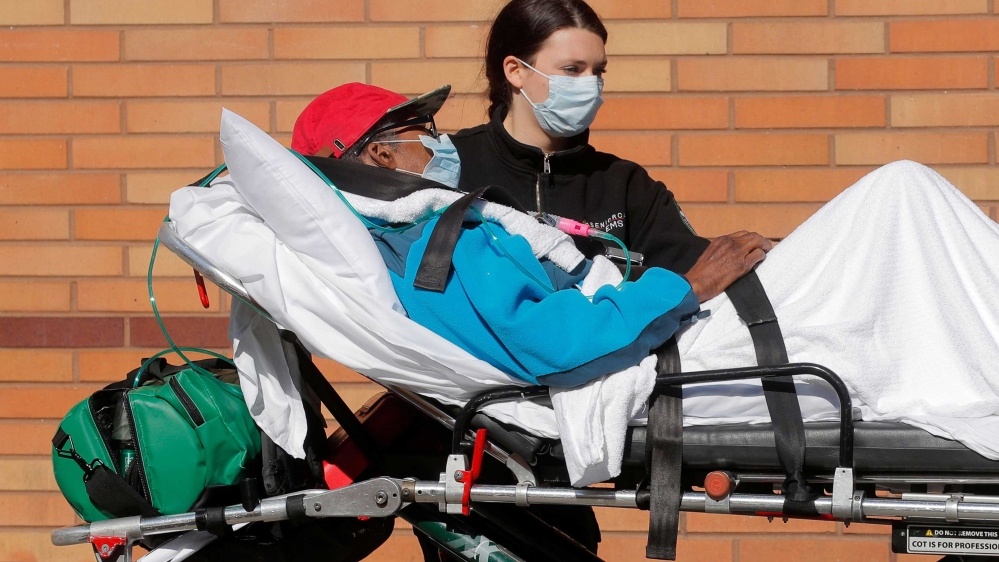 A healthcare worker wheels a patient on a stretcher into the Wyckoff Heights Medical Center New York City, New York, US [Brendan Mcdermid/Reuters]

The grim outlook has triggered a debate within the White House about the efficacy of a malaria drug, hydroxychloroquine, for use against COVID-19.

In a CNN interview on Monday, US trade adviser Peter Navarro acknowledged that members of the White House coronavirus task force disagreed over the drug.

Dr Anthony Fauci, director of the National Institute of Allergy and Infectious Diseases and one of the most trusted voices on the US coronavirus response, and other top health advisers have argued there have not been enough studies done to prove the drug is effective against COVID-19.

Navarro told CNN that task force members eventually agreed the Federal Emergency Management Agency “would immediately begin surging hydroxy into the hot zones”. All decisions on dispensing the drug will involve only a doctor and patient, not the federal government, he said.

Navarro said 29 million tablets of hydroxychloroquine were sitting in a warehouse, ready to be distributed.

Why Final Fantasy is the Biggest RPG Series of All Time

Sony's Noise-Canceling Wirefree Earbuds Are on Sale For $189

A Rape Trial Through The Eyes Of A Juror

Everything New on Netflix in June: Dark Season 3, 13 Reasons Why Season 4, and More
21 mins ago

Everything New on Netflix in June: Dark Season 3, 13 Reasons Why Season 4, and More

How to Protest Safely in the Age of Surveillance